Venerable sisters of our congregation

VENERABLE SISTERS OF OUR CONGREGATION 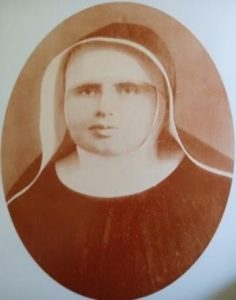 Nerina Maria was born in Capezzano (LU) on June 16, 1902, in a simple reality, from a family of honest and hardworking people. Her parents were fervently engaged in the human and Christian formation of their children, they worked hard to provide for the family, for work reasons, the family moved to England, where Nerina learned English. Although

living in a Protestant environment, the love for the Church, the Eucharist and the Virgin Mother was born in her.

After a few years she returned to Italy and expressed an admirable balance in her daily work and relationships. Her meeting with Don Piero Scavizzi, a priest from Rome who was in Capezzano for a rest was fundamental for her, to him she expressed her life aspiration, to follow the Lord Jesus Christ and bring souls to God. In 1923 accompanied by Don Piero Scavizzi she entered the Congregation of the Mantellate Serve di Maria of Pistoia, in Zadar. On May 17, 1923, in Pistoia, she received the religious habit and took the name of Sister Liliana.

The missionary vocation already present in her soul emerges clearly during the novitiate period, so much so that on July 10 she made a formal request to the Mother General to go for mission. In 1924, together with Sister Stefania Lago, she received the Crucifix in the church of SS. Announced in Florence to go as a missionary in Africa.

On August 24 she arrived in the community of St. Joseph in Swaziland. The mission to which Sister Liliana associates the idea of martyrdom is seen and felt as apostolic dedication and active commitment ‘to do some good’. Generosity in the apostolate, dedication and care for the poor, hospitality for all, collaboration in community life and in relations with the population, are the characteristics of her missionary action.

Later the work began to get heavy but she did not clearly manifest her situation. After the change of climate in Mbabane at the request of the doctor, she renewed the religious vows and continued with her activity, but her health did not improve. Sr. Liliana had the call of Jesus that leads her not on the field of action but on that of suffering. Her illness is accepted as an expression of God’s will and as a means of saving souls. For this reason she constantly begged the Lord to grant her perfect surrender to His will. Her situation worsened, but she did not accept to return to Italy, she wished to die in mission land.

Since her arrival in Swaziland, it was made clear to her that the martyrdom of blood is rather difficult because everyone loves the nuns, but the martyrdom of the heart is continuous and always possible. The smallest act of love is more fruitful than all the works, for this reason Sr. Liliana offered her weakness and smallness for the salvation of souls by promising to continue her missionary apostolate even in paradise. Given the seriousness of the illness, she made her perpetual vows, received viaticum and extreme unction and died on March 5, 1929.

O eternal Father, who aroused in the heart of Liliana Moriconi an example of apostolic vocation, in the name of Jesus Christ, and of Our Lady of Sorrows, I beseech you to glorify your humble servant on earth, Suor M. Liliana Moriconi granting the grace for which I pray ardently.

Our Father, Hail Mary, Glory be to the Father.

Founder and first superior of the Mother of Sorrows Institute, Blue Island, Illinois

(For private use only)

O eternal Father, in the name of Jesus Christ, and of Our Lady of Sorrows, I beseech you to glorify your humble servant on this earth,

Mother M. Luisa, granting the grace for which I pray ardently.

(Nine “Glory to the Father” and seven “Hail Mary” to the Sorrowful Mother.)

Mother Luisa was born in Casigno, in the province of Bologna, (Italy) on November 9, 1873. At baptism she received the name Domenica Angela Luisa. From her earliest years she showed signs of precocity which her loving parents did not fail to notice. Fortunately for the girl, Domenico and Enrica Pedrini were people who loved God, deeply attached to faith and religious practices, so much so that from the beginning Luisa’s mind was impressed by their pious examples.

She was so devotedly immersed in the love of Christ and his Holy Mother that at the age of ten she decided to embrace chastity. Her ardent desire to enter the cloistered community of the Poor Clares of Bologna met a strong opposition from her father who perhaps loved her more than her other children, because she was the only daughter. Luisa’s affection for her father was great, but

it did not surpass her love for angelic virtue, and at the age of eighteen she joined the Servants of Mary of Pistoia.

After making her first vows and completing her studies, she was sent to Bologna to teach. Shortly thereafter she was appointed Secretary General and carried out her duties with the utmost love and attachment to the Congregation. Later in Mestre (Venice), she directed the thriving Institute of St. Joachim and the adjoining orphanage for girls. As prioress and director she carried out her commitment with love, zeal and intelligence.

Her virtues were appreciated by the whole population and earned her the highest esteem of the Rev. Mons. Felice Groggia, of happy memory. Mother Luisa wished to go to Africa as a missionary, but her request was not accepted; instead she was commissioned by the Superior General, Mother M. Antonina Chinotto in 1913, to leave her homeland to found the Congregation in the United States.

Mother Luisa possessed the true soul of an apostle and the thought of sufferings and sacrifices did not worry her; when in the following years she found herself faced with countless trials and difficulties, she willingly suffered, sacrificing her life for the love of Christ and Mary. In all the painful disappointments, the incredible contradictions that she went through, Mother Luisa stood out for the heroic virtues of obedience, resignation and constant patience.

Hers was a life of faith in God – a determined and constant personality. Throughout her life her prestige was so well hidden from her personal humility that few realized her greatness. To those in her community, she was an example of humility, obedience, patience, wisdom, fortitude and modesty. She built everything by her attachment to every detail of the Holy Rule, refusing even during her illness, all that was not strictly necessary.

Death peacefully reached her on the morning of October 17, 1938 after an eight-month illness in which she faithfully carried out her duties to the end from her bed of pain. Her only desire was to die “doing her duty” and in this she was not disappointed. Part of the honor she had been deprived of by her own will in life, was recognized at the time of her death in the careful celebration of her obsequies and by a funeral procession that was said to be the largest in the history of Blue Island. 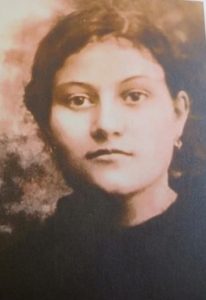 On February 17, 1910 Cecilia Eusepi was born in Monte Romano (Viterbo). she ascribed to the Catholic Action and to the Third Order of the Servants of Mary. While still a young girl she entered as postulant among the Mantellate Servants of Mary of Pistoia, but because of weak health, she had to return to her home in Nepi after three years, where, assisted by her mother and the friars of the nearby College of the Servants of Mary, she

tried to always progress more in the perfection of virtue and holiness of life, enduring terrible suffering with heroic firmness. she died on October 1, 1928 and desired to be dressed in the habit of the Order of the Servants of Mary. She is now buried in the Church of St. Tolomeo in Nepi. In June 2012 Pope Benedict XVI proclaimed her Blessed.

Prayer for the canonization of Blessed Cecilia Eusepi 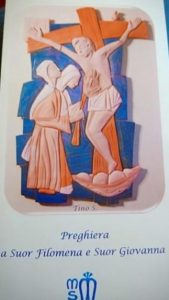 O Most Holy Trinity, you are the source of all life and goodness. From you emanate every gift of grace that helps us to walk and to grow as children towards holiness.

We thank you for having given us Sister Filomena and Sister Giovanna, who, by consecrating themselves totally to Our Lady of Sorrows,

they followed her in her “YES” to you and your way of love,

offering themselves to the service of the poor, the sick and the education of children. Their charity drove them to remote places of the Apennines and from there,

as a seed, they radiated, inviting the generosity of many young ladies,

so that they may follow closely the Lord Jesus and, “do a lot of good” following the example of Mary.

Now, God fountain of goodness and mercy, we ask you to glorify these servants who have done so much for the glory of Your name.

Therefore I beg you, through the intercession of Sister Filomena and Sister Giovanna to grant me this grace (ask for the grace …) that I ask of you. Amen